To Train Up A Knight: Training Sons to Serve King and Kingdom 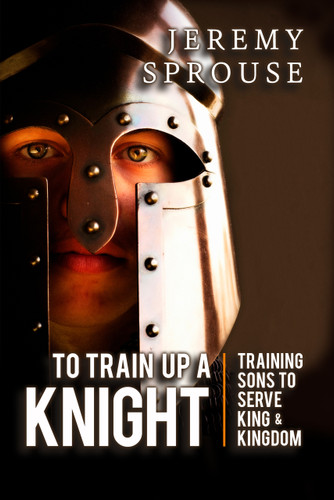 To Train Up A Knight: Training Sons to Serve King and Kingdom

A man clad in iron armor sits upon a mighty horse. In one hand he holds his shield and the reins of the horse; in the other he holds a lance with its sharp tip pointing into the air. There is a moment of stillness and anticipation. Then, he adjusts his shield, spurs his horse forward, and begins to point the lance toward his enemy. Hooves thunder and armor clanks as he charges into battle…. Such a scene fascinates men and boys alike. It isn’t just the fighting and the weapons that fascinate us, though––it is what knights represent. Knights embody many characteristics we want to encourage in our sons: honor, bravery, courage, discipline, integrity, faith, and service. At the core, knights, like Christians, are servants of their king and kingdom. In fact, the word knight comes from an Old English word cniht, which means “servant.”

This book uses the imagery of the faithful knight to train young boys to become men who will serve God as King and work for His Kingdom—to become knights of God. Each of the 26 lessons is centered on a passage of Scripture and includes a role model to emulate, questions to help apply the lesson, and a quest to make it memorable. These devotionals combine to form an unforgettable journey for fathers and sons. Spending quality time talking about eternally important subjects, growing together towards God—you will find your son eager to study God's Word as you are both called to the highest standard of manhood.

We need to take the training of our young men seriously. Being a man is more than acting tough and showing bravado. Sports and careers are not the most important matters. Young men need to be taught to seek first the Kingdom of God and His righteousness. That is the goal and purpose of this book!